As some of you may know, International Wota has been hosting a series of posts dedicated to Summer refreshment, Idol style. Since this has been a hot summer, I decided that as long as someone else was paying, I might as well go out, get myself a refreshment, and think about Idols while enjoying it.

To that end I grabbed an old notebook that was laying about next to my bookcase and headed into the only significantly large town in Vermont. Being a Vermonter, a few things are near and dear to my stomach. Maple syrup, cheese, creemees (soft serve to the rest of you), apples, and perhaps our state’s most famous export, Ben and Jerry’s ice cream. I love Ben and Jerry’s ice cream enough to ignore that I’m lactose intolerant, but today I was feeling like a good girl, so I bought…

Sorbet! One scoop of Berry Berry Extraordinary and one scoop of Lemonade. Delicious and refreshing, and no stomach-ache later!

After sitting down to eat my guilt-free sorbet,  I opened the notebook and proceeded to write a long, heartfelt something-or-other concerning how much of my history has been inextricably linked to Idols. The idea was good, and I’d still like to turn it into a post, but there was nothing Summer-y,  nor anything refreshing about it. So I scrapped it, and spent a few weeks oscillating between conviction that I’d get my Summer Refreshment post done THAT VERY HOUR, or never get it done at all and be forever ten dollars in debt to Ray, a prospect which terrifies me. The solution to my terror came as I was staring at the cover of Buono!’s mini album, Partenza. Staring, in fact, at Miyabi’s legs. Her pants, to be even more specific. What a great change of pace to see an Idol in pants for once, how intriguing, how… refreshing.

Look at almost any random photo of an Idol. If she is from H!P, she will be wearing a poofy, glitzy tutu-monstrosity with dead birds and beanie-babies glued all over it. If she is from AKB48, she’ll be wearing a bikini. If she’s from any of the other dozens of Idol groups currently on the market, she’ll doubtless be wearing one of those two, or a school-girl uniform. Of course, you say. Why not? Idols thrive on their appearance of cute, attractive femininity. What better way to show that off than in a skirt, dress, or few centimeters of bathing suit?

For that very reason, seeing an Idol wearing pants is extremely refreshing. The look is so rare, so casual and slightly boyish that it can cast the Idol in a new light. Pants make you do a double-take, whether they’re part of an official costume, or a casual snap-shot from a blog entry. In appreciation of that fact, I dedicate my Summer Refreshment post to the Best of Idols wearing Pants.*

First off are the pants that sparked the idea for this post. On further inspection we find that these are, indeed, capris. No matter. Miyabi’s legs look long and slim, especially next to Airi’s giant maxi skirt. As a note, Momoko also wears pants in the alternate outfits for this mini-album. Jeans, even!

Speaking of jeans, Takahashi Ai is our next Idol in Pants. Ai’s blog is a great spot to find these kinds of pictures, since Takahashi’s love affair with denim has been recorded extensively in her near-daily outfit snaps. 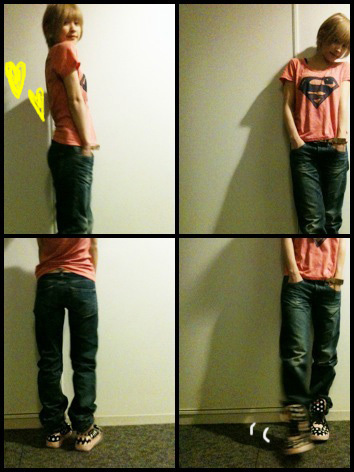 Ai-chan’s jeans tend to be slouchy and boyish. While Ai’s choice in legwear doesn’t rectify the impression she’s been giving off lately that she is G-dragon’s less feminine twin, she still looks great. 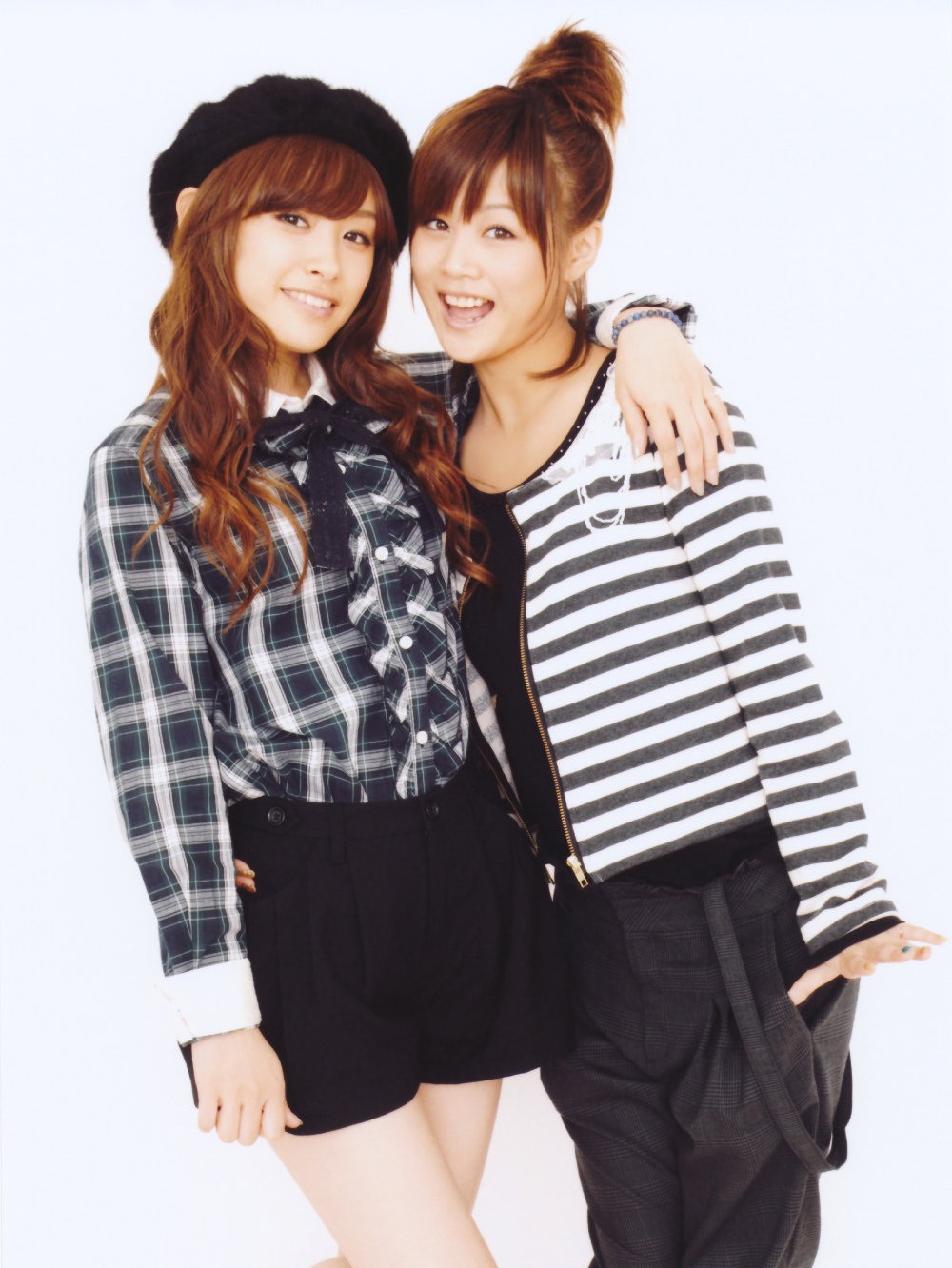 r
See how excited Gaki is? That’s because she can now do a deep-knee bend and a cartwheel without fear of flashing Ai. Not that Ai would mind…

Speaking of giant lesbians, there is one woman whom stylists put in pants at any opportunity. I almost considered not including her in this post, because it would be too easy. Luckily I came to my senses in time to provide you with these excellent images of Yoshizawa: 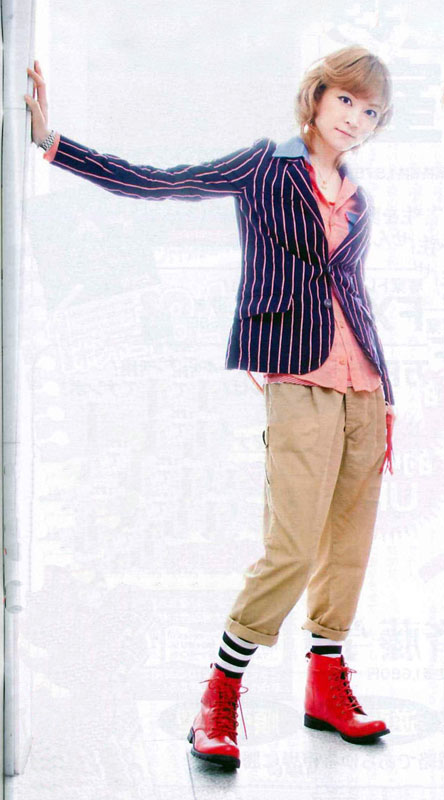 Ignoring the fact that she looks vaguely clown-like with those shoes and socks, here we can see Yoshizawa doing what she does best- looking absolutely cool and princely, with just enough of a feminine edge to make EVERYONE question their sexuality. Here, have more: 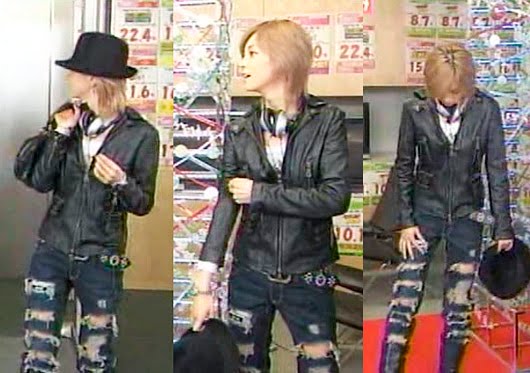 I hate jeans with holes in them. I think they’re silly. But those jeans… are good. I like them VERY much. 😀

Ayaka got the picture a long time ago, when she taught Yossy a very useful phrase:

She does, Ayaka. She does.

Let’s keep speaking about giant lesbians for a minute, and move on to Sayumi. Unlike Yossy, it’s nearly impossible to find pictures of Miss SugarPinkBunnyPrincess in pants. But they do exist, and I, dear readers, have found one for you:
f

This is one of my favorite pictures of one of my favorite Idols, so if you were planning on scrolling past it quickly on the way to the rest of the post, I must humbly request that you stop and look again. And then again. For a full minute. Or else.**

Now that we’ve moved on to bikini shots, let’s consider the group that’s turned the bikini shot into high art; AKB48. One member of that group in particular is extremely fond of jeans. So fond, in fact, that back in 2009 she felt the need to share her love of jeans in her “private video.” I’m talking, of course, about Miyazawa Sae.
g

(Apparently 2009 was also before they invented charisma. OOOOOH.) 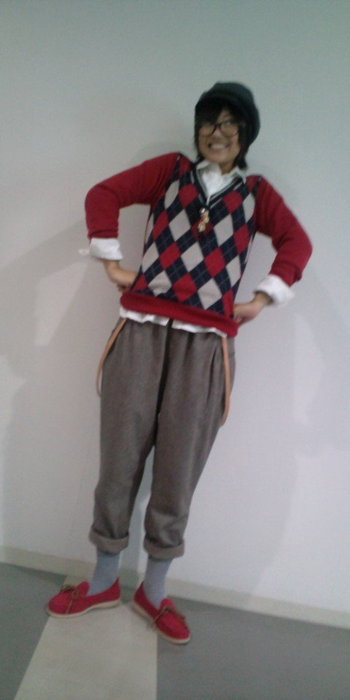 s
The rest of AKB48 have worn pants rather more rarely. The most significant instance of it in my (admittedly lacking) memory would be this stage, Himawari-gumi’s first: 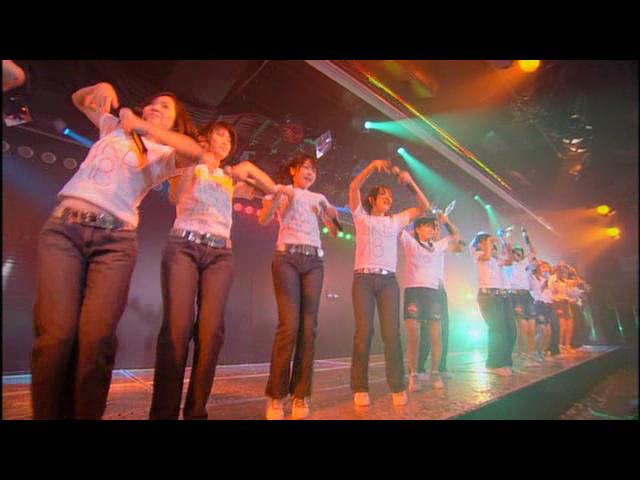 Back when AKB still had the image of Idols you could Meet, I think jeans really suited them. The casual, girl-next-door vibe of denim worked in their favor. They look so relatable. When all is said and done, I think that the relatability factor is what I love the most about seeing Idols in pants. Take away their piles of glitter and enormous costumes, and they’re just girls… 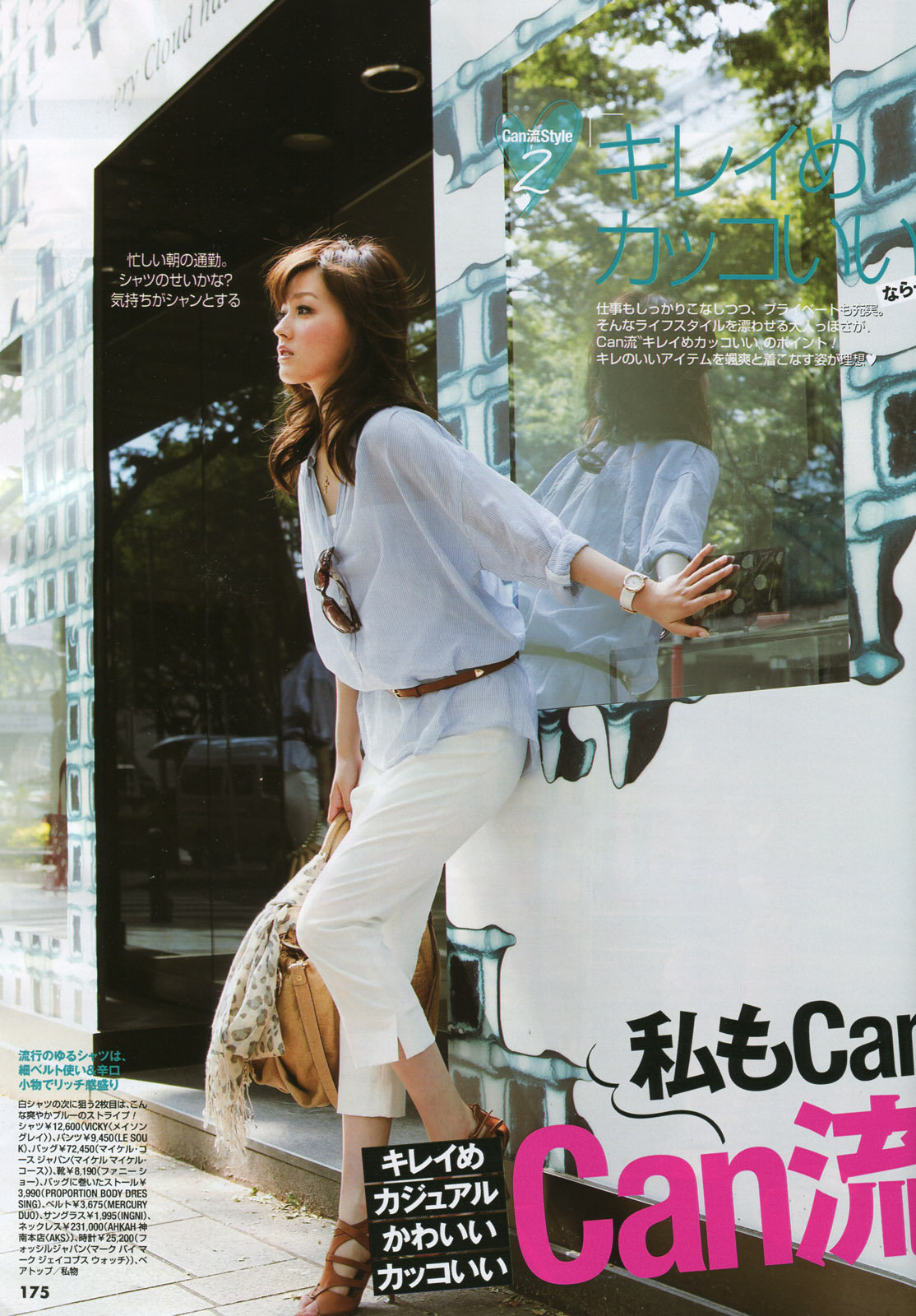 …albeit extremely beautiful ones. I am practically piddling myself over Koharu’s modeling career. Even more chances to see those legs in gorgeous, tailored pants!

Before I sign off on this post, let me leave you with a few videos that feature Idols in pants, in all of their leggy glory; from the classics, to the new, to the downright horrific:

The moment when Yoshizawa’s fate for the next five years was sealed. Also the last time real men were allowed in a Momusu PV.

And now, the truly horrific, only in this post because the lovely Murr reminded me of its existence…

The murdered stuffed animals attached to their hips like war trophies, and Reina’s entire everything (those leggings, those “Say YEAHS”… Uuuugh),  are only saved by how unequivocally sexy Kamei and Gaki are in their jeans. Yum.

This post has been ridiculously fun. Expect to see a part 2 in the future!

Finally, enjoy the last few weeks of your Summer!

*Full-body jumpsuits, overalls, and male Idols are not included. Unless they look REALLY good.

This entry was posted on Monday, August 15th, 2011 at 2:37 am and is filed under AKB48, Blogs, Buono, C-ute, Concerts, Eye Candy, Hello! Project, morning musume, Natsuyaki Miyabi, Pants. You can follow any responses to this entry through the RSS 2.0 feed. You can leave a response, or trackback from your own site.