Time to rank some Berryz!

It’s Berryz Koubou’s turn to be ranked. Berryz was the first h!p group I’d eve heard (Warrachaou yo Boyfriend being the first song), and they’ve remained my favorite group. 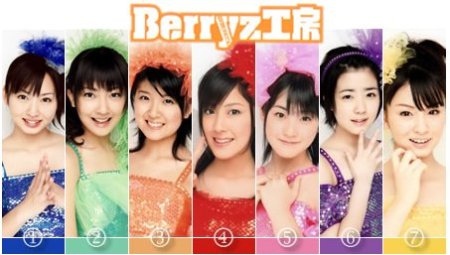 1st: The lovely Sudou Maasa! Maa-chan embodies just about everything I look for in an idol. She’s not stick skinny, has an interesting persona and isn’t short as anything. Adding on to that Maasa’s beauty and voice, and she is the perfect member for me. Only recently has Maasa begun to shine within Berryz, but she seems very comfortable in her slightly more focal position.

2ns: For the longest time, Yurina was my unconditional favorite in all of h!p (yes, even above Yossy). This was mostly due to three things: Her height, her voice, and her birthday. As a tall girl myself, Yurina’s height appealed to me. Finding out we had the same birthday made me like her all the more. And her position within the group was comfortable for me; not one of the three “shadow” members, but not so popular that she was overdone. She’s slipped from her reigning position quite a bit. I’m not actually sure why.

4th: This was difficult. Momoko and Miyabi are basically interchangeable in their spots. Miyabi only came out slightly ahead because she was my very first favorite within Berryz, and I like her voice. She always seems a little bit cool to me. Like she could be Matsuura Aya’s voice with Miki’s personality.

5th: Buono! has been good to Momo. I find her more tolerable when she uses a voice that does not sound helium induced (like her wonderful duet with Risako, Watashi ga suru koto nai Hodo Zenbu Shite Kureru Kare). She’s also entertainingly odd. I love her pinkies!~

6th: I feel bad putting Captain all the way down here! She has a good voice most of the time (other times she sounds like a bullfrog, too deep) and is a fantastic dancer. And I am one of the few people who likes her eyebrows and crooked eyes. I think it gives her a sympathetic look. Also, I think that she’s a good leader for the others in Berryz. Quiet but supportive.

7th: Risako. How you make me angry, Risako. I hate watching her in concerts, her voice often makes me cringe (there are exceptions), and her looks aren’t very consistent. I also get this very smug feeling coming off of her in waves. it’s as if she’s saying, “Why yes. Of course I am the most popular member of Berryz. You are all beneath me!”. It’s been said before: She’s just a brat. Another main thing about Risako that makes me mad is that, while the other girls are trying their hardest to sing well and with musicality (which is a word!), Risako just wriggles about and literally screams her lines into the mic. It’s so… infuriating that she doesn’t even appear to be trying! Such as in this performance: http://www.youtube.com/watch?v=W0XVLJFDusE

None of the girls sound great here, but Risako just sounds utterly crap (I’m sorry, fans of Risako. This is just my own opinion). Especially that last line.

This entry was posted on Thursday, February 14th, 2008 at 9:54 pm and is filed under Berryz koubou, opinions. You can follow any responses to this entry through the RSS 2.0 feed. You can leave a response, or trackback from your own site.

7 Responses to Time to rank some Berryz!